About the Author
Carol Oates came into the world on Christmas morning, in an elevator. Raised just across the street from the childhood home of Bram Stoker, author of Dracula, it was only a matter of time before Carol’s love of all things supernatural would emerge.
She began experimenting with fiction at school and keeps the notebook containing her first unpublished novel in her desk drawer. Over three decades later, all her stories still begin life scrawled on paper.

When not writing, Carol can be found exploring history with her son. Luckily, he shares her love of old buildings, castles, and tombs. Website      Twitter      Facebook     Goodreads

Guest Post
In both Shades of Atlantis and Shades of Avalon, women hold positions of strength and authority. Eila and Morrígan both had seats on the Guardian Council. Guinevere is a warrior. Triona finds her strength, and in Shades of Avalon, the women train to fight for their family right alongside their men. Many of their Guardian traditions go back to ancient times.

The women of Ancient Ireland enjoyed much freedom in comparison to the last few hundred years. They could be rulers in their own right. They could own land. They enjoyed professions, education, trial marriages, the right to divorce their husbands on the 1st of February(or equivalent) each year. They held position in society with their husbands. They hunted and went into battle as warriors. They were on a level footing with men in many respects. The Irish were once predominantly Pagan with both God and Goddess.
These people lived under Brehon Law. It’s not know when these laws began, but mentions of them in reference with theTuatha Dé Danann suggest they could date back to 2,000 BC or further. They continued in existence until 17th century, through several invasions and the advent of Christianity in Ireland.
It’s extraordinary that these impartial laws existed for so long and it’s though this is because the people themselves held justice in high regard and every person at every station was considered equal. The punishment reflected the crime. For instance, steal from a poor person was more heinous then stealing from the rich.
With the laws in favor of women to such a degree, it’s ironic that it was the English Parliamentunder Queen Elizabeth that stamped them out in favor of English law. 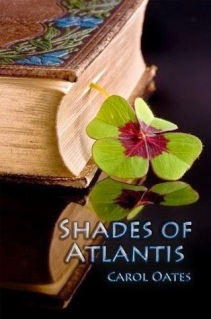 Summary
Ben Pryor grew up as an average kid in Camden, Maine, unaware of the supernatural storm brewing in his Celtic blood. However, at nineteen, as the last born in the royal line of the beings that once ruled Atlantis, Ben has eagerly embraced his newfound abilities and birthright.

When Caleb, his sister’s mate, goes missing under suspicious circumstances, the prime suspect is the last remaining member of the overthrown corrupt Guardian Council.

With the discovery that an old acquaintance has been keeping secrets and the future Ben was so sure of shifting before his eyes, the situation becomes more complicated, the ransom for Caleb too high.

In the sequel to Shades of Atlantis, Ben will delve deeper than he ever imagined into the magical old ways of the Guardians, the secrets of Excalibur, and the truth behind the legend of King Arthur.

Blog
children’s books
← What are some of the must-see TED talks?
→ Youtube – Meg Rosoff – Fantastic – Get Coffee