I am officially nominated for an International Education Blog Award 2011, thousands were nominated but only a few went to the public voting round. I was nominated in the of category of Most influential blog post.

You simply select the Category of  Most influential blog post.
Then in the box beneath the category you select my name Michelle Moloney King.

A huge thanks to these amazing Writers and Bloggers who nominated me: 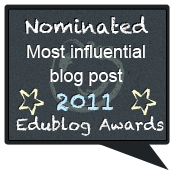 I grabbed the below for more info on the Edublog Blog Award.

‘Each year there are more and more nominations, and of increasing excellent quality, reflecting the the ever growing edublogosphere .

Unfortunately we can’t list every single nomination in each category — that’s too overwhelming for everyone.

Instead, our intrepid team of judges combed through thousands of nominated sites to whittle them down to a manageable number of shortlisted nominations for each category.
There are many factors that determine whether a nomination is shortlisted, and some categories were  considerably more competitive than others due to the incredible number of nominations.
Factors used for shortlisting included for  influential posts – indicators of reader engagement (such as # of comments,  bookmarking, pingbacks)

Please do vote for me!

7 responses to “Thousands Nominated for an International Education Blog Award”